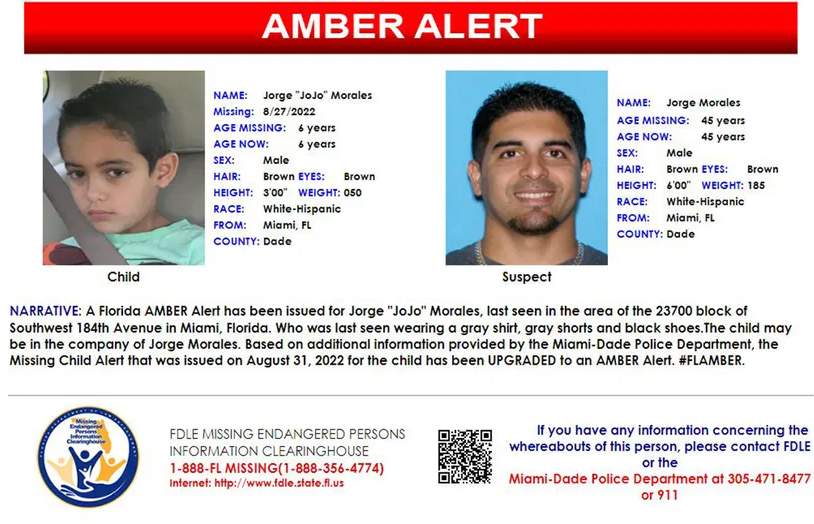 The Miami-Dade Police Department, Special Victims Bureau/Missing Persons Squad, is investigating the whereabouts of a juvenile that went missing with his father and paternal grandmother.

According to investigators, the juvenile, Jorge Morales, was picked up by his paternal grandmother in accordance with a court time sharing order. The father failed to return the juvenile, violating the court order, and the child’s mother contacted the police to report the incident.  Missing Person detectives were notified and began an investigation.  A Missing Persons Alert was initiated, and investigators began to follow all leads in an attempt to locate the father and child.  In collaboration with the Miami-Dade State Attorney’s Office, an Arrest Warrant was issued for the father, Jorge Gabriel Morales.

Investigators have not been able to locate the father and are concerned for the safety of the child due to the possible need of services.  Anyone with information of their whereabouts, is urged to contact 911 or Crimes Stoppers at (305) 471-TIPS (8477).

UPDATE #1: The missing juvenile, Jorge “Jojo” Morales, has been recovered in Canada.  Jorge Gabriel Morales and Lilliam Pena Morales have been taken into custody by the Royal Canadian Mounted Police.  The boy was found in good health and unharmed. We would like to thank the Federal Bureau of Investigation, United States Marshals Service, Florida Department of Law Enforcement, Office of Miami-Dade State Attorney Katherine Fernandez Rundle, Maine State Police Department and all law enforcement agencies that offered their assistance and support.  Director Freddy Ramirez said, “this is another example how local, state, federal, and international law enforcement, along with the United States and State Attorney’s Office coming together for the safety of a child and will continue to work together to fight the greater evil.”

Arrest Made in Double Homicide
October 24, 2022